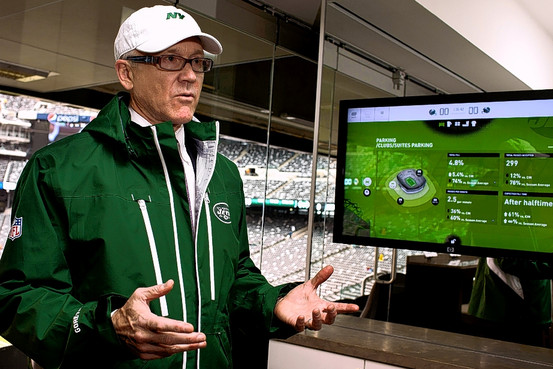 Before a Dec. 12 game against the Dolphins, Jets owner Woody Johnson stands in the owner’s suite at New Meadlowlands Stadium in front of his computer program that monitors in-game business.

On a recent trip to Rome, Jets owner Woody Johnson visited the Colosseum. It was neither his first visit nor his second, though he always considers the experience to be an education. As he said of the architects who designed the amphitheater two millennia ago, “They did some good stuff.”

Now that he has an ownership stake in New Meadowlands Stadium, Mr. Johnson has a vested interest in stadium planning. As he walked about the Colosseum, he found himself studying the entrances and exits, and he imagined epic bottlenecks.

“You can organize people when they’re coming in,” Mr. Johnson said before a recent home game. “But when they all decide to leave after the gladiators do their job, everyone’s in a big rush. No matter how many exits or escalators, it’s always been a problem.”

Mr. Johnson considers it his job to do what the ancient Romans could not, and his goal of eliminating crowd congestion after Jets’ victories—or (gasp!) losses—is just the start. To that end, Mr. Johnson hired Roundarch, a digital design agency, to conceptualize and construct a computer system that monitors virtually every single in-game business activity at the $1.6-billion stadium.

It is known among Jets officials as Mr. Johnson’s “Command Center,” and thousands of pieces of real-time data—everything from hot dog sales to bathroom lines—are available at his fingertips on a 42-inch touchscreen display that hangs in his owner’s suite. If this all sounds Big Brother-ish, well, it is—and Mr. Johnson and his staff are unapologetic. It is all designed to enhance the fan experience, they say. And if it helps the franchise become more profitable in the process, then the Jets will have no complaints.

“You can look at every piece of information in 360 degrees,” said Thad Sheely, the Jets’ executive vice president for finance and stadium development. “You’re able to see what’s happening as it happens.”

The program’s home screen is called “The Pocket,” and it has a four-panel layout that highlights separate categories: tickets, parking, merchandise and concessions. Tap on “Tickets,” and Mr. Johnson can see how many fans have entered the stadium, when they entered and which gates they used. Tap on “Concessions,” and Mr. Johnson can see gross sales and how that figure compares to previous games. Every ticket and parking pass is barcoded and scanned; every beer sale, processed and recorded. All that information is instantaneously uploaded to the Command Center.

It bears more than a vague resemblance to a video game, with its bold graphics and vivid colors, and Mr. Johnson was asked if he sometimes has fun just fiddling around with it. “Oh, totally,” he said.

He often extols the virtues of simplicity to his staff: If you can’t explain something in very basic terms, then you must not understand it well enough. So he asked Roundarch, which has offices in New York and Chicago, to create a system that was painless to operate and produced information that was easy to understand. By his own admission, Mr. Johnson is no tech geek. But also appears to be progressive.

“If you look at older stadiums and venues, these things were not run as well as traditional businesses,” said Geoff Cubitt, president and CTO of Roundarch. “But Woody is clearly a business guy, and he’s looking at it differently. He’s looking at it as the CEO of an organization.”

While the system operates on a macro level, Mr. Johnson—and the other executives and merchandisers who have access to it—can analyze metrics on a micro scale. The Command Center features a map of the stadium with icons that represent the exact locations of all 941 concession and merchandise outlets. Tap on any of them, and a cornucopia of data spills forth in surprisingly digestible form.

Say Mr. Johnson wants to monitor one of the merchandise booths up near Section 345. He can see gross sales for the afternoon, or for the past 10 minutes, or for a 15-minute period two hours ago—all thanks to a scrolling timeline. He can get an update on sales of merchandise subsets, such as jerseys, women’s apparel or hats. Then he can check out subsets of those subsets: How are Mark Sanchez jerseys selling at that booth? How does that total compare to last week’s game? To other booths on the same concourse? Are they running out of No. 6 jerseys? (Which, believe it or not, can happen if Mr. Sanchez is having a strong game.)

With that in mind, Roundarch has implemented an automated system that tracks inventory and sends alerts if any booths need to be restocked. Mr. Johnson also has access to live feeds of hundreds of security cameras, and the stadium is heat-mapped to monitor crowd flow. The whole idea is to take the guesswork out of game-day operations and reduce it to a futuristic science. “You can reduce lines and areas of congestion by re-routing people,” said David Vanslette, vice president of Roundarch. “And honestly, this is just the beginning. We’ll be able to tailor the experience for fans in ways that weren’t possible before.”

The idea for the Command Center was hatched in June, and Roundarch sliced the process into four stages. The first essentially entailed launching the system, which was completed before the start of the regular season. The Jets are now in the second stage, part of which involves making improvements based on the data the system collects.

The Jets already have made a couple of pregame modifications. First, Mr. Johnson said, opening the gates three hours prior to kickoff proved to be too early. Fans, he said, are more interested in tailgating than milling about inside the stadium, and the Jets were wasting resources—and money—by staffing concession stands for an extra hour. So now the gates open two hours before kickoff.

But Mr. Johnson and his staff still want fans inside the stadium before kickoff, and he found there was only a slow trickle before the Jets were host to the Cincinnati Bengals on Nov. 25. So to provide some incentive before they played the Miami Dolphins on Dec. 12, the Jets announced a 25% discount on food and non-alcoholic beverages for the first hour. Sales increased by 50% during that hour—fans came through the turnstiles at a brisk rate of 400 per minute—and were up 20% overall compared to the team’s previous two home games.

“Without the program, we wouldn’t have been able to track that,” Mr. Sheely said.

The final two stages of the process seem to excite Mr. Johnson the most. They revolve around what the team describes as “fan engagement,” and Roundarch is expected to unveil a mobile application next year that fans will be able to download to their hand-held devices.

Mr. Johnson said he anticipates a wide range of uses. Which bathrooms are the most empty? Are there any traffic issues near the stadium? Mr. Johnson even suggested using the app to announce beer discounts at various concession stands as a way to control crowd flow.

“I can see fans controlling the huge video boards through the app,” Mr. Johnson said. “We want that sort of interactivity. They’ll decide what they want to see, what music they want to hear. We’re even working on something where they’ll be able to predict plays, a sort of contest—although they won’t be able to call plays, at least for the moment.”

The Command Center, Mr. Johnson said, is limited only by “the imagination”—and by its inability to score touchdowns.

Write to Scott Cacciola at scott.cacciola@wsj.com. 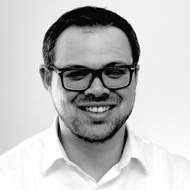